Humberside LMC is celebrating Black History Month in October 2021 by sharing stories celebrating the incredible richness and diversity of Black and Brown heritage in the UK.

Black History Month originated in the USA and was first celebrated in the UK in 1987. People from African and Caribbean backgrounds have been a fundamental part of British history for centuries, but many people believe this contribution to society is often overlooked, ignored or distorted. Black History Month gives everyone the opportunity to share, celebrate and understand the impact of black heritage and culture. 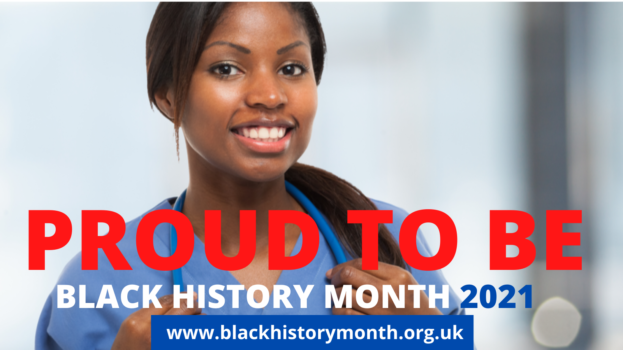 Throughout October we'll be publishing stories on this page illustrating the great contributions made to medicine by people of Black and Brown heritage, and also highlighting important medical stories and issues which many people won't be aware of.

Dr Folusha is a portfolio GP working in London who studied at Birmingham Medical School. Her time is spent between clinical practice in a busy central London practice and as a Clinical Lead for GP Retention for the North Central London CCG. She has experienced the common feeling of "imposter syndrome", particularly as her roles and responsibilities have grown and she has received endless expressions of surprise when patients and colleagues discover she is the GP or clinical lead. "It can be quite disappointing when you're the last person in the room that people assume is the doctor. But I am driven by the determination that we can change that perspective and that more of us will be those rooms together!"

Dr Folusha is featured on the Instagram Black Female Doctors page which was set up to unite, support and empower Black female Doctors.

Schizophrenia in Black Caribbeans in the UK: Underlying Causes of the High Incidence Rate

Read more on the study.

Born in Trinidad in 1873, Alcindor graduated with a medical degree from Edinburgh University in 1899. He then worked in London hospitals for several years before going into practice on his own. Despite his qualifications and experience, he was rejected by the Royal Army Medical Corps at the outbreak of war in 1914.

Determined to play his part in the war effort, Dr Alcindor instead signed up as a British Red Cross volunteer, treating wounded soldiers at London railway stations as they returned from the battlefields. He was later awarded a Red Cross Medal for his life-saving work. After the war, Dr Alcindor became a senior district medical officer for the Paddington area and became known locally as the celebrated ‘black doctor of Paddington’. In 2014, on the centenary of the outbreak of the First World War, a blue plaque was unveiled at the site of his old surgery.

Re-thinking the Inclusion of Race in British Hypertension Guidance

A paper published in the Journal of Human Hypertension has questioned NICE guidelines which recommend different interventions for people of Black African or Black Caribbean heritage for treatment of hypertension to those who do not have this heritage. Briefly, people with Black heritage are offered calcium channel blockers initially but not offered angiotensin-converting-enzyme (ACE) inhibitors, in contrast to other patients who are offered ACE inhibitors initially, in preference to calcium channel blockers or thiazide diuretics. The British NICE guidelines are also notable in their contrast to US, South African and International hypertension guidance, as none of these include race as a determinant of treatment decisions.

The paper concludes that "there is an urgent need to re-consider the inconsistencies in using ACE inhibitors to lower blood pressure for Black people and the rationale of assigning antihypertensives based on self-assigned race. Furthermore, there are inconsistencies in the inclusion of race in all guidelines and the reliance on US data without context for identifying short-term and long-term effects of ACE inhibitors such as angioedema or risk of stroke."

Read more on Re-thinking the inclusion of race in British hypertension guidance.

There are many inspiring pioneers from BAME communities who have often gone unrecognised. These are just a few of them:

Starting in 1932, 600 African American men from Macon County, Alabama in the USA were enlisted to take part in a scientific experiment on syphilis. The “Tuskegee Study of Untreated Syphilis in the Negro Male,” was conducted by the United States Public Health Service (USPHS) and involved blood tests, x-rays, spinal taps and autopsies of the subjects.

The goal was to “observe the natural history of untreated syphilis” in black populations. But the subjects were unaware of this and were simply told they were receiving treatment for bad blood. Actually, they received no treatment at all. Even after penicillin was discovered as a safe and reliable cure for syphilis, the majority of men did not receive it.

The scandal was not fully exposed until 1972. A class action lawsuit resulted in a settlement of $10 million. It’s estimated that the life expectancy of black men fell by up to 1.4 years when the study’s details came to light. Many also blame the study for impacting the willingness of black individuals to willingly participate in medical research today.

Read more about the Tuskegee Study.

The Legacy of Henrietta Lacks

Henrietta Lacks (1920 – 1951) was an African-American woman who died aged 31 of an aggressive cervical cancer. Her cancer cells are the source of the HeLa cell line, the first immortalized human cell line and one of the most important cell lines in medical research. An immortalized cell line reproduces indefinitely under specific conditions, and the HeLa cell line continues to be a source of invaluable medical data.

Lacks was unwittingly the source of these cells from a tumor biopsied during treatment at Johns Hopkins Hospital in Baltimore, Maryland. These cells were then cultured by George Otto Gey who created the cell line known as HeLa, which is still used for medical research. As was the practice at the time, no consent was required to culture the cells obtained from her treatment. Neither she nor her family were compensated for their extraction or use.

The Lacks family was not made aware of the line's existence until 1975. With knowledge of the cell line's genetic provenance becoming public, its use for medical research and for commercial purposes continues to raise concerns about privacy and patients' rights. As Henrietta's grandson Alfred Lacks Carter has said, “They were taken in a bad way but they are doing good for the world.”

Watch a video on the impact of Henrietta Lacks.

Unacceptable Disparity in Maternal Deaths Because of Ethnicity

Black women are four times more likely than white women to die in pregnancy or childbirth, says the seventh annual report from MBRRACE-UK (Mothers and Babies: Reducing Risk through Audits and Confidential Enquiries). Women from Asian ethnic backgrounds face a twofold risk, and women living in the most deprived areas of the UK are almost three times more likely to die than those in the most affluent areas.

The analysis of maternal deaths in the UK, issued by Oxford University’s Nuffield Department of Population Health, says that the coronavirus pandemic is likely to have worsened the disparities they have highlighted.

The report includes surveillance data on women in the UK who died during pregnancy or up to one year afterwards in 2016-18 and details the lessons for maternity that can be learnt care from confidential inquiries.

Read more on the study at The BMJ.